Today I rode from Syracuse, NY to Rome, NY, a total of 46 miles (my new ideal distance!). It was another great day for riding -- warm and sunny, but not too hot, and although there was a headwind most of the time, it was relatively mild (in the 5 mph category).

I'm thinking about the weather a lot these days. No matter how I slice it, Isaac looks ready to deposit rain and storms in my biking path on Tuesday, Wednesday and Thursday of next week. Amsterdam, Albany and Rhinebeck. Ugh. Of course, the long term forecast can change for the better and even if it doesn't, with any luck it will be the type of rain I can dodge or wait out if it gets serious. Certainly there are now more places to take shelter from a storm than there were in Eastern Montana! But I've had remarkably good weather on this trip so far, so I feel like I'm kinda overdue for a bad spell. Fingers crossed, nonetheless.

The route today couldn't quite match up with yesterday's. Busy roads -- but good shoulders -- out of Syracuse, and then a series of roads, still with good shoulders, that were just a little bit too big and busy to be in my sweet spot. So I spent more time on the Erie Canal Towpath than I intended....and....today, it was OK. Still dusty as heck (you really have to clean and oil your chain and cassette each day afterwards), but it was a nice respite from the traffic and, although pretty familiar at this point, also quite scenic. But the surface did degenerate at times, going down to a single track (see photo) and heavier layers of gravel.

At one point I met another laden biker, going the other direction, so we naturally stopped and chatted. Oddly, Chris was travelling the same way I was -- he had started in Minneapolis and was headed to New York. So our 180 degrees opposite paths caused us both to scratch our heads for a moment, until we figured out he was going Southeast to his destination for the night, and I was going Northeast, and we just happened to pass on a road going North/South. But Chris sorta put me to shame:  (a) he was camping, (b) he had ridden 120 miles yesterday and was planning on doing 100 miles today, (c) he was wearing sandals and (d) he was planning on making NYC by Tuesday (there's one way to deal with the rain threat!)

But, if there's one thing that's been reinforced for me on this trip, it's that you've got to...repeat after me..."ride your own ride." Chris had to cut our conversation short because he was worried about the mileage he had left and riding too much in the dark. So that's not for me, no thank you! I didn't even get time to take a photo (in which you would have seen, despite Chris being a full year younger, that I look a lot better in the waistline department -- competitive, moi?).

In any event, I pedaled into Rome at the latish hour of 4, briefly stopping, I hesitatingly admit, at a Burger King (sorry, Bob) for a vanilla shake and a $1 BK Bacon Burger, before pulling up (can you pull up somewhere on a bike?) at the Angel's Nest B & B, run by Mary Davis out of a converted convent. The pews and some of the original stained glass remain and it's, how shall I say this, different. As is Mary, who traveled for about 25 years, all over the world, as a teacher/educator for military personnel kids. But settled in Rome when she retired (she had lived in Syracuse), where she has more irons in the fire (civic duties, hospital boards, charities) than you can shake a stick at. Which she shared with me over some champagne out in her backyard patio -- painstakingly decorated with flower pots too numerous to count or describe. Definitely a lovely and interesting host. I can only begin to imagine what breakfast tomorrow is going to be like! 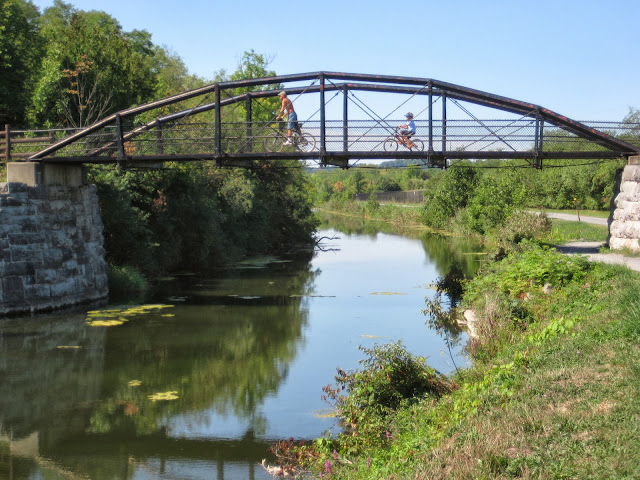 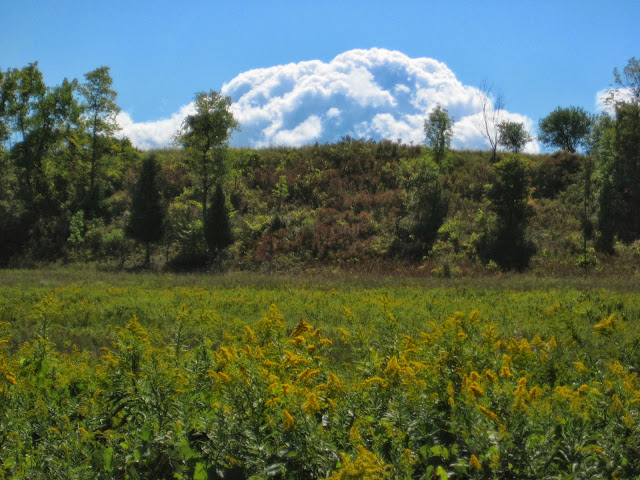 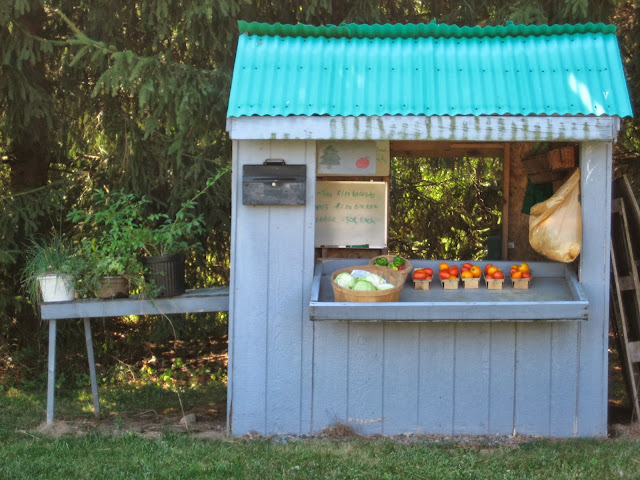 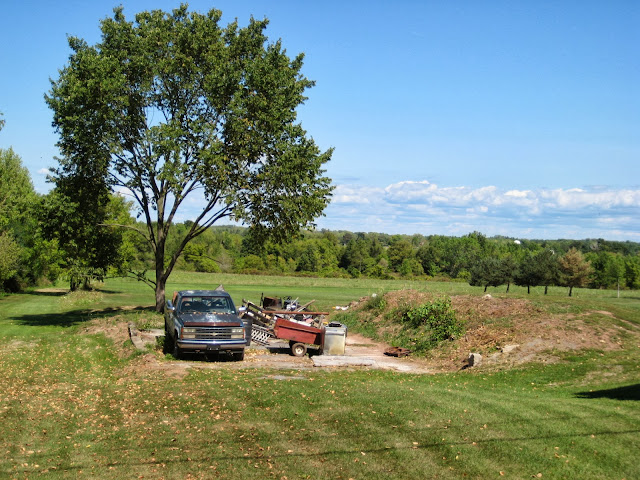 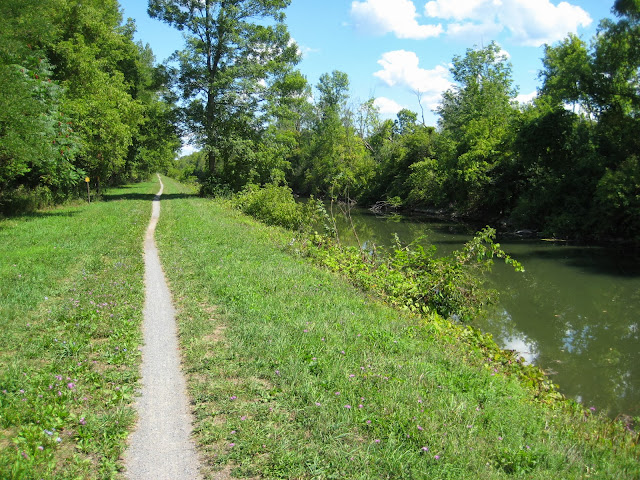 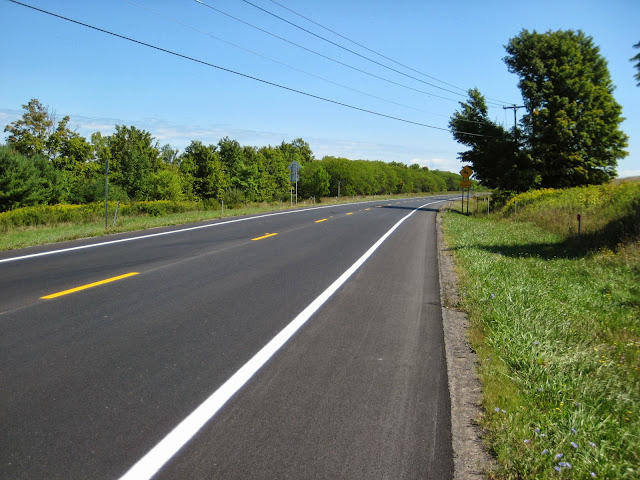 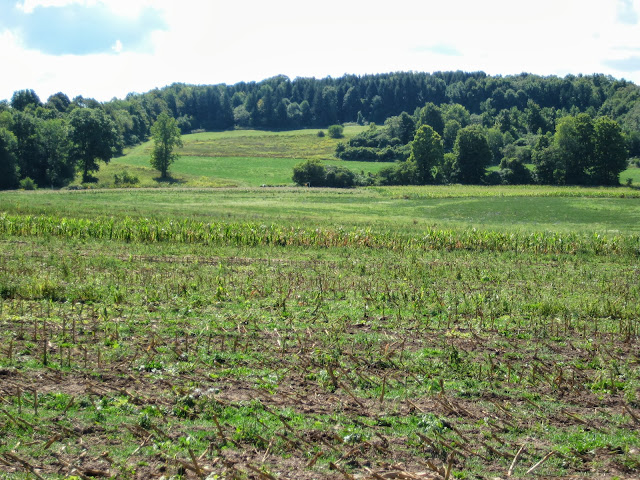 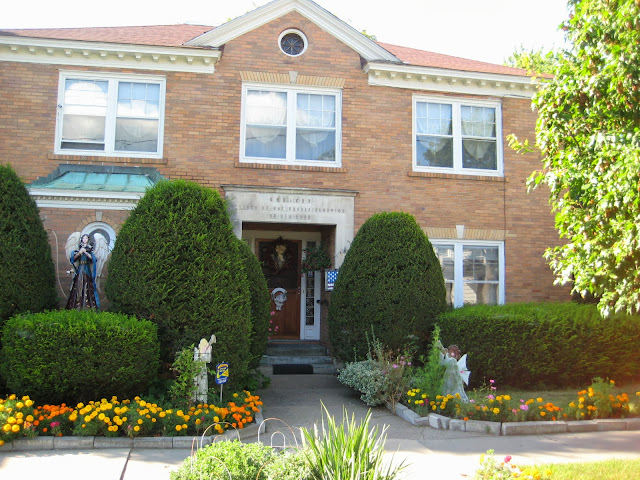 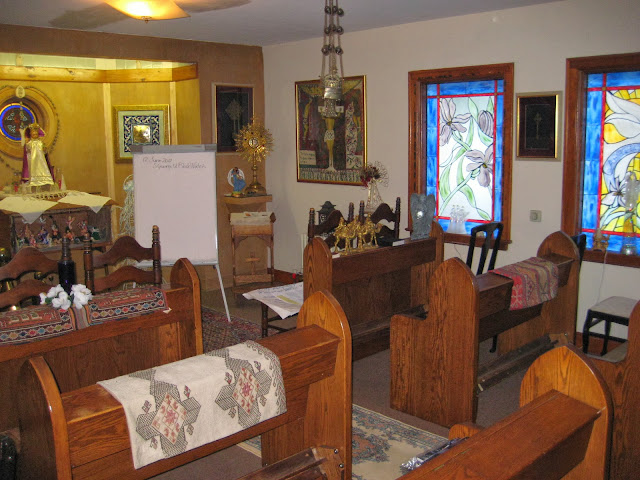