Day Eleven -- Cold and Rainy in the Palouse

Today's ride was really about just getting there. We woke up to heavy rain in Colfax, WA and decided to see if we could wait it out. We only had to get to Plummer, ID today, which would be about a 47 mile ride,  with reasonable total ascent of about 2500 feet. So we thought we could afford a later start than usual. Unfortunately, by Best Western's Noon check out time, the rain was still pretty strong. And the temperature had only risen to the low 50's. And the wind was a steady 10 to 15 miles an hour, with gusts up to 25. And the first 6 miles of our route out of Colfax were on the highway. Perfect conditions for biking, yes?

Actually, there was one positive, and it was significant. The wind was at our backs. I'm not sure we would have left the hotel if it was the other way around.

For the first 20 miles of our ride, to a little town called Oakesdale, we were cold, wet and pretty miserable. The Palouse scenery, with its wonderfully varied hill contours, was still pretty fantastic, with the green of the fields made even greener by the rain. But it was kind of lost on us today. We were too wet and cold to slow down (except to put on extra layers).

We were saved by Crossett's Market in Oakesdale. First, and most basic, we got in out of the rain and cold. But as importantly, they had great hot chocolate, which warmed us and restored at least a modicum of feeling in our extremities. And, while we waited to dry out and see if the rain would let up, we chatted with Becky, behind the register, and watched while she greeted each customer by name and got caught up on all the local happenings. Crossett's was clearly a central social meeting place for the town.

We stayed there for about an hour (long enough for about a dozen different social conversations) -- about as much as we thought we could wait to leave to get to Plummer -- but not before Becky insisted on comping us each to a second cup of hot chocolate. "I can't stand seeing you guys shivering," she explained. Thanks, Becky! 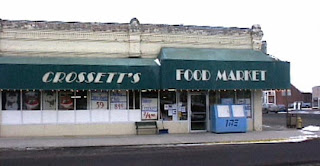 At 3:00 we set off again, reluctantly, in a much lighter rain that....actually stopped. We didn't get any sun, but we did have to stop and take off some of our layers. So the final two hours of riding were a whole lot better. And we left Washington behind and crossed into Idaho. Another state down!

No photos today (other than the Google image at left of Crossett's), for obvious reasons. Also no map or metrics, as all we're getting in Plummer is an Edge phone signal (no wi-fi, no 3G), which simply can't manage the data upload. But I'll edit and add it when we're back in civilization, so to speak.

Tomorrow the forecast is for sun, although still cool, and we ride The Trail of the Coeur d'Alenes. Definitely looking forward to it. And we expect to be to Glacier by July 1st. Almost 600 miles covered so far!