Today's ride was 58 miles, from Umatilla, OR to Walla Walla, WA, which on the heels of yesterday's long ride, might have been a struggle. But it was probably our easiest ride to date.

The main reason is we had a stiff tailwind, in excess of 10 mph, virtually the whole time.

Secondarily, there wasn't a lot of climbing -- just the usual ascent we always seem to get, i.e., first thing leaving town, and another one about 30 miles in.

It is quickly becoming apparent to us that weather is going to be a huge factor on this trip, probably in this order: first wind, then heat, then rain (no relation to Earth, Wind and Fire). Yes, I put rain last (I hope I don't have to eat those words later) because, basically, it's manageable. You put on your gear and you slog on. Heat is a big one -- when it's in the 90s and 100s, with constant sun, your energy can get sapped, and a passing cloud can feel like a blessing from the weather gods. But wind is the big enchilada. A 50 mile day, with a strong headwind, can quickly become a 25 mile day; conversely, with a tailwind, it is easily a 75 mile day (for you sticklers out there, no I don't have cites for these numbers -- this is straight Schwed and Loper anecdotal evidence). The best way I can put it is that riding into a headwind is like constantly climbing a hill.

So, today, Bob and I were very grateful for the assist from Mother Nature. Our 58 mile ride probably was about the equivalent, in energy expenditure, of 40 miles with no wind (see Journal of Cycling Phenomena, Vol. IX,  August 2009 "Quantum Bike Mechanics: What Einstein Didn't Tell You About Wind in Your Face").

The ride itself was mixed. Leaving Umatilla, we thought we were in for a long day. We started on Rte 730, a fast two-lane road with a fair amount of traffic, although with a decent shoulder. But the scenery was not particularly inspiring -- flat, no river, lots of power transmission lines. But 10 miles on, the landscape totally changed. Suddenly, the Columbia re-appeared. As did giant mesas on both sides. And, equally fast, all evidence of civilization disappeared (other than the road, of course). We enjoyed a lovely about 20 miles of riding as a result.

We said goodbye to Oregon for the final time (our first state down!) and crossed into Washington (no river crossing needed - WA is south of the Columbia here), where the landscape again changed and became more agricultural and flatter, with a lot of farms, ranches, horses and cattle in evidence.

We took our lunch break in a small town in WA called Touchet. First we stopped at the local mini-mart to replenish our fluids (literally the first opportunity to do so in 40 miles) -- and again ran into the family from yesterday (the five going cross country), and this time exchanged names and info about routes: Kym (the Dad), Chris (the Mom), Wednesday (the older daughter), Carly (the younger daughter) and Jordan (the Nephew). Some interesting names there. I asked Kym whether he had to draft the kids into this project -- his response was that Wednesday was gung-ho, Carly had to be "persuaded" and Jordan didn't know what he was getting into! But they all seemed cheerful and very good natured. They're going on to Clarkston, WA and Missoula, MT, as we are likely to do, too, so I suspect our paths will cross again.

Next, we explored Touchet a bit, looking for a shady and grassy spot (really not easy to find) where I could eat the sandwich I purchased in Umatilla that morning (Bob didn't have one - he appears to subsist solely on Power Bars while riding - but nonetheless patiently accommodates my need for an actual lunch). We found a perfect spot under a tree, with a lovely view of a farm, but clearly on someone's front lawn. Without missing a beat, Bob went up and knocked, introduced us, and proceeded to chat with the older lady (farm widow?) who answered. And, yes, she was fine with us eating under her tree - and did we need any water?

The last 10 miles into Walla Walla was mostly about just getting there. We rode on Rte 12, which became a four-lane highway, although, again with excellent shoulders. You won't find many pictures in today's post from this stretch.

We're going to take our first rest day tomorrow in Walla Walla, and hopefully explore some local wineries. We're both a bit ambivalent about it (the rest day, not the wineries). We're looking forward to recuperating and resting our bodies some (although we are both doing remarkably well so far on the aches and pain front, knock wood), but are a bit mixed about breaking our rhythm. Is it possible we will miss being off the bikes tomorrow? I actually think it is.

So we'll see how the rest day works. It may be that we will end up preferring planned easy days, where we still ride and progress our journey, but sleep late and ride a more "friendly" distance, like 20 miles (assuming we can find towns spaced properly).

No post tomorrow. Didn't I tell you? It's a rest day. But query whether the next post (presumably on Sunday) should be labeled Day Eight or Day Nine? 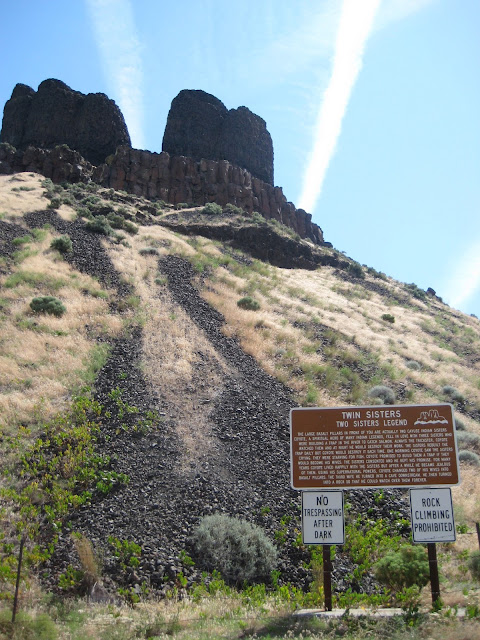 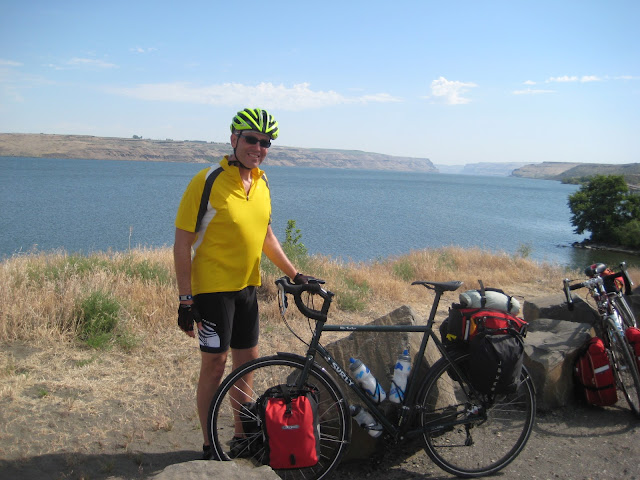 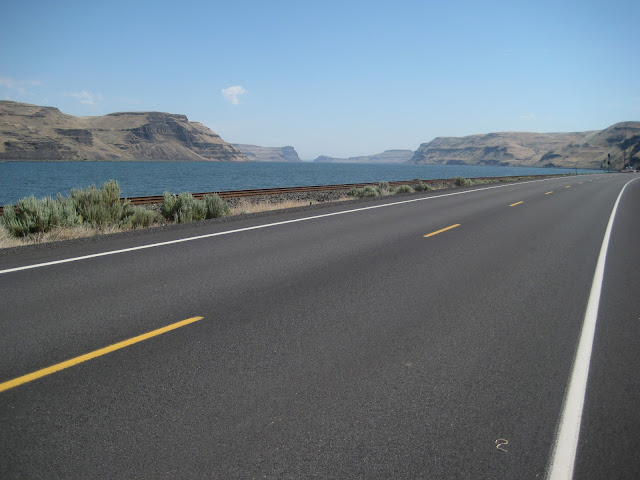 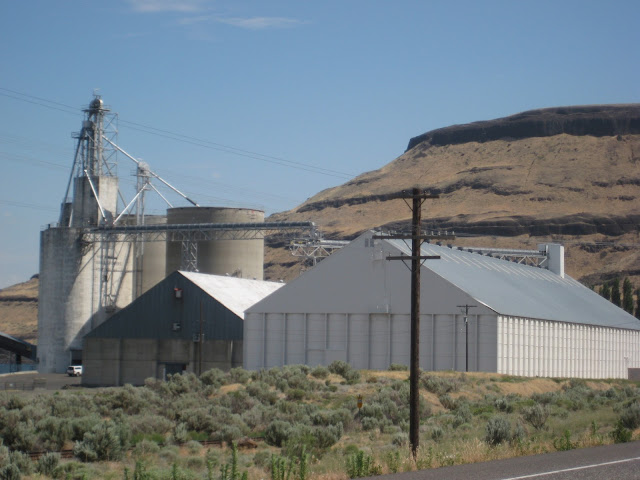 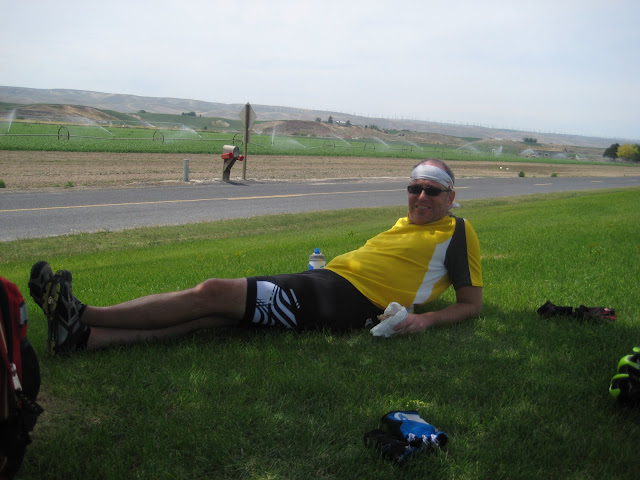 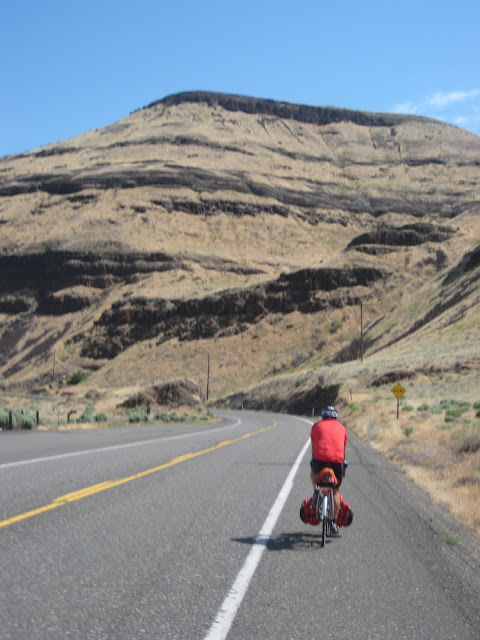