Today we rode from Stevenson, WA to The Dalles, OR -- 50 miles in all -- and it provided some of the absolutely best scenery, views and riding to date.

It wasn't clear that the day was going to turn out that way. Bob has caught a cold and was up a good portion of the night, congested. I woke up groggy and legs aching, and promptly cut myself shaving. It was just a tiny nick, but it was one of those that just wouldn't stop bleeding. So the first stop of the day on our bikes, in the wrong direction for about 1/2 a mile, was to a pharmacy. Cold medicine for Bob, a styptic pencil for me. Problems solved (or at least mitigated). And, for the record, riding with tissue paper stuck to your upper lip doesn't really work.

The first 20 miles of the route -- in the right direction -- were on Rte 14 in Washington, on the North side of the Columbia River, and the views over the river to the crags and cliffs on the Oregon side were great. As was the significant tailwind. Less great was the road -- 55 mph, two lane, often with no shoulder to speak of. But the traffic was reasonably light, and (for readers of prior blogs) I'm glad to report that Washington and Oregon drivers seem to be good passers. For the traffic theorists out there, I found that if I rode just to the right of the white line defining the thin/non-existent shoulder, cars passed much closer to me, I think because they didn't feel they had to move out of their lane since, technically, I wasn't in it. But if I rode just to the left of the white line, in the car lane, they tended to swing out wide into the oncoming lane to pass. However, even with this observation, I must admit that I prefer having a decent shoulder and leaving the scientific method to someone else.

When we got to the part of Washington opposite Hood River, Oregon, we faced the problem of getting over the Hood River Bridge -- closed to pedestrians and bicyclists. I was ready to ignore the prohibition, but Bob smartly flagged down a pickup truck, with a lovely couple (Tim and Lisa, I believe, but that may not be correct), who generously and graciously waited while we heaved our bikes and ourselves in back and then drove us across the mile-long span. Crossing the bridge in the back bed of the truck, I could see that (a) it was an all metal grid (slippery), (b) very narrow and (c) very windy (cross-wind out of the West). Good call, Bob! Actually, great call.

In Hood River, we could not ignore that it is the home of Full Sail Brewery -- so we decided to experiment with the effects of having a mid-day beer on our afternoon biking. I'm here in The Dalles Inn, writing this post, so we did OK, but I think we both ended thinking that the beer is better left as a post-ride recovery drink.

It was after we left Hood River, with about 30 miles to go to The Dalles, that the riding simply became spectacular. We started with a significant climb, up a number of hairpins, to the Historic Columbia River Highway State Trail. Closed to cars, and high up overlooking the river, it was fantastic. And then it got even better. We passed through the town of Mosier (pop. 430) and began climbing on Rte 30 through a huge cherry orchard. Here, unlike back near Portland, Rte 30 was empty of cars (presumably they're all drawn away by the nearby Interstate 84) and incredibly scenic. We climbed to around 750 feet, to Rowena Overlook (amazing views), and then started the most exhilarating series of switchbacks, for almost 3 miles, back down to about 100 feet. The climb and the descent, taken together, were up there with the best biking I have ever done! 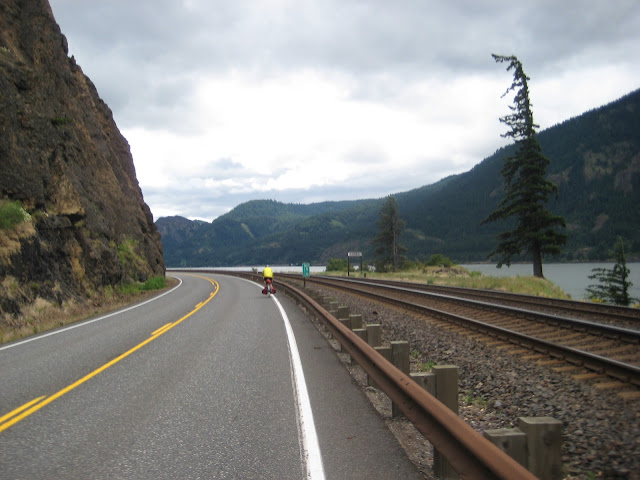 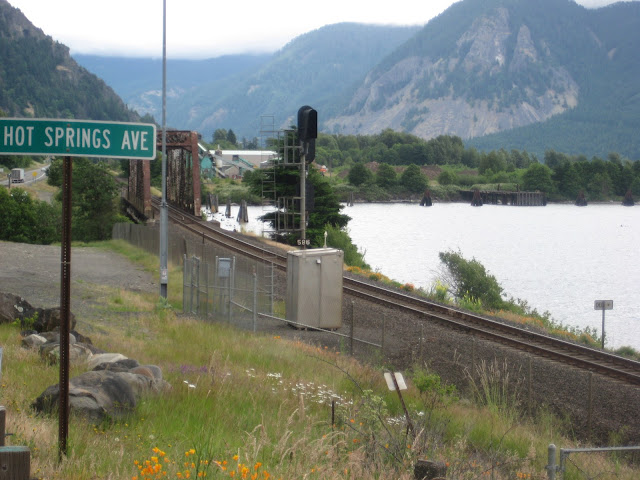 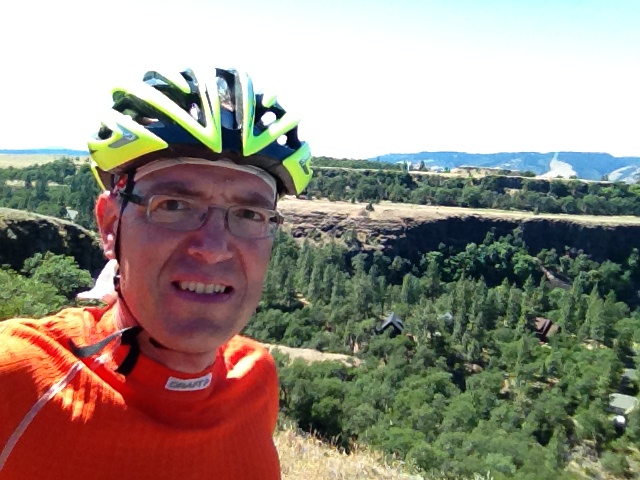 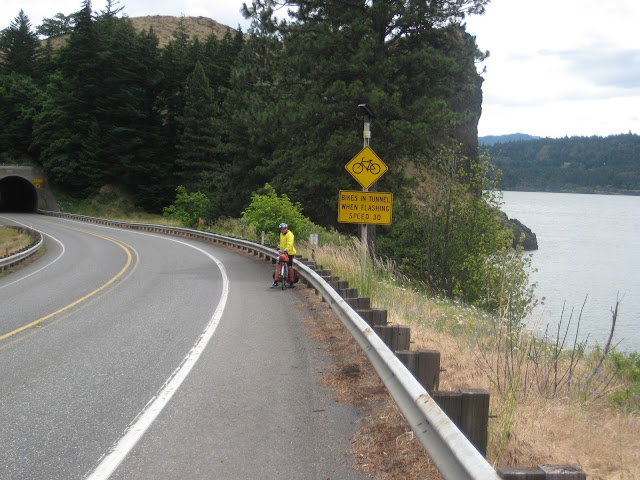 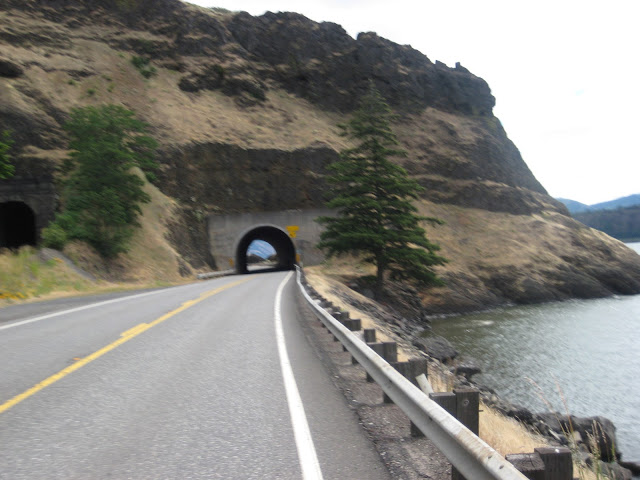 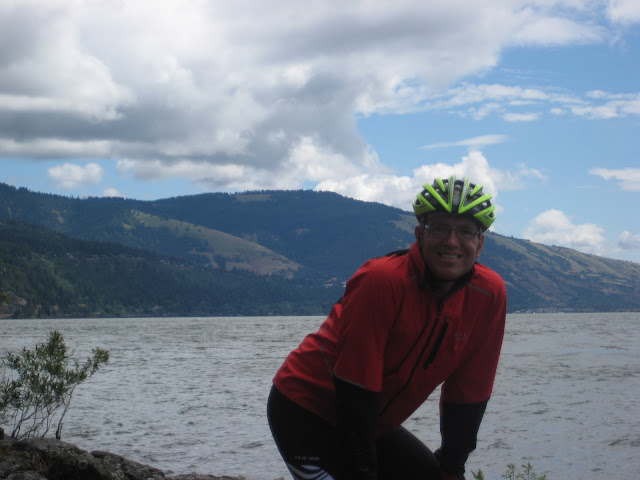 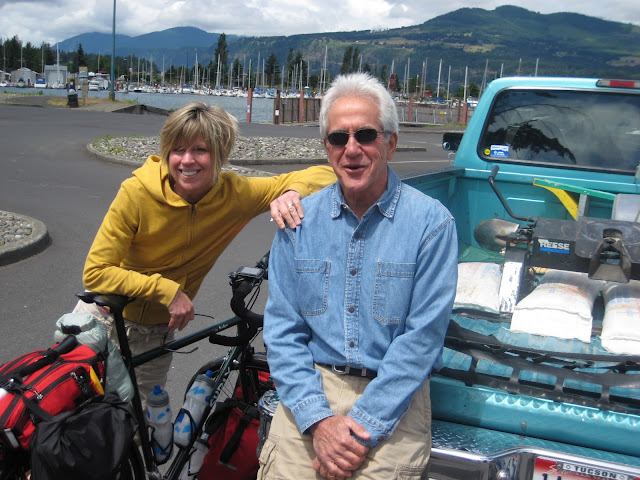 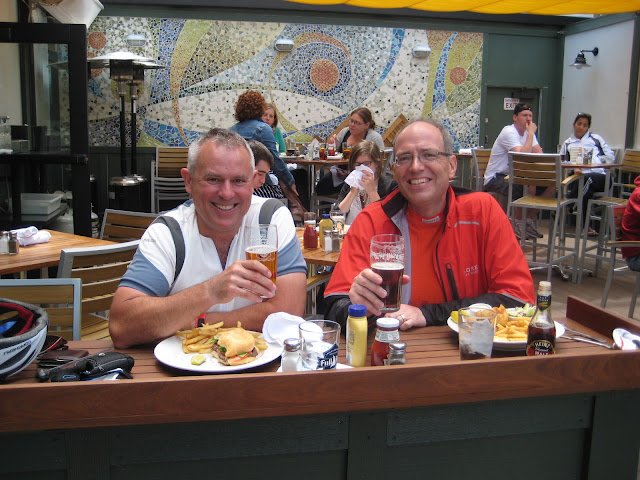 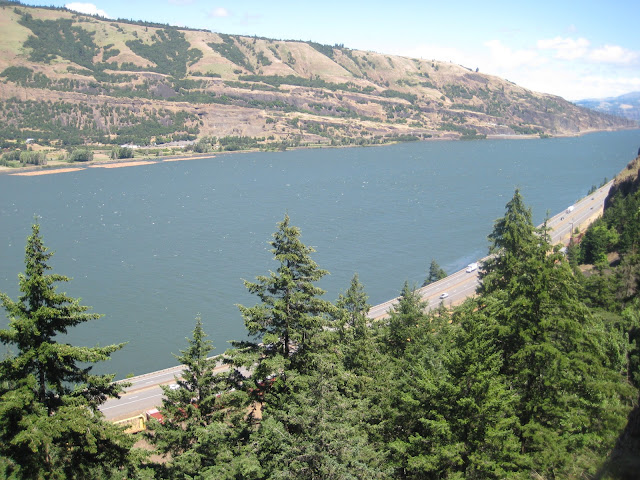 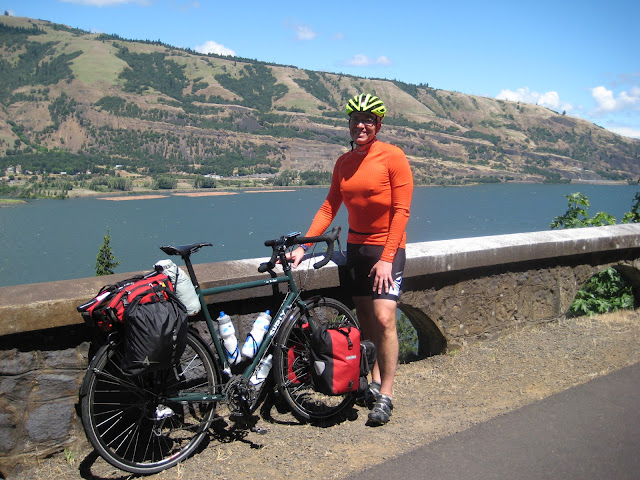 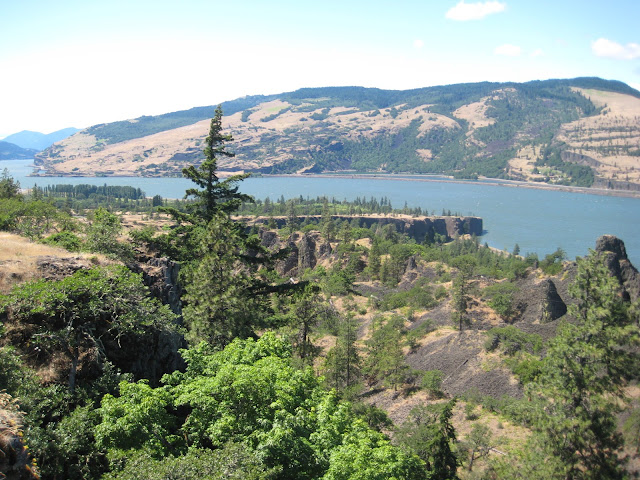 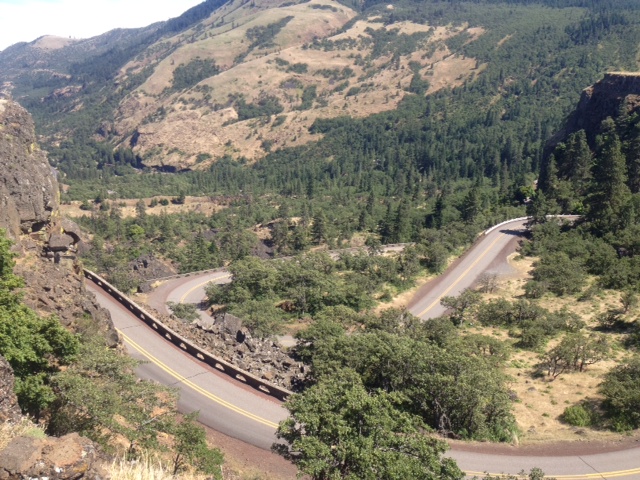