Today we rode from Pomeroy, WA to Colfax, WA, a total of about 48 miles, representing the first day of our two day detour to get to the trailhead of The Trail of the Coeur d’Alenes. It was quite a day: probably the hardest day of bicycling I have ever done – and I think Bob would probably say the same.

The reason? Climbs and more climbs. In a prior post I opined that wind, heat and rain – in that order – were the weather elements most likely to affect our trip. But I really should have talked about total ascent distance, even though not a weather datum, as it is probably the single factor that will impact the degree of difficulty of a day’s ride.

Well, today’s ride was a total ascent of about 4700 feet (ignore the Ride with GPS total ascent data below, which gives us more credit than due – my Garmin malfunctioned in saving today’s trip details, so I had to simply upload the route, which gives more total ascending, but I’m trusting what the Garmin actually reported during the ride). To make it more difficult, the climbing came in big, steep clumps, rather than over time in gentle rolling hills.

Oh, and the first climb, of 1200 feet ascended over 9 miles, was on our favorite surface, gravel! How did this come to pass you may ask? Well, I had plotted out a different route for today, one that assiduously avoided gravel (which I am now checking for religiously on Google Earth). But in having breakfast in Pomeroy, and talking with locals, everyone said, no, no, no, we needed to take this other, much more scenic, less trafficked, route. A bit more climbing, but well worth it, they said. One of the attractions of the newly revised route was that we would cross the Snake River across the top of a dam. Was the dam open to travel across, we asked? Everyone said yes. So off we went. Without time to check the route on Google Earth.

So, lesson learned about accepting local advice without verification. Not only did we have a lengthy climb, often at 7 to 9% grades, on gravel (which, by the way, was relatively deep gravel, making it even tougher), when we got to the dam – guess what? Well, you’ve probably already done so. Open to cars and motorcycles, closed to bicycles and pedestrians. This is a wide dam, with tons of Army Corps pick up trucks and engineers milling about. It could not have been safer to walk or ride across on our bikes. But strictly forbidden, even after we explained we had already ridden 20 hilly miles, had 30 even hillier ones to go, were kinda exhausted, and could not face turning around (rerouting around the dam would have added yet another 20 or so hilly miles!). We threw in that we were riding cross country for good measure, but were told that rules were rules, and that this was a liability issue (hoisted on my own lawyerly petard!). After about a 30 minute standoff, during which Bob amiably chatted with everyone (while I said nothing, lest I completely lose it about the idiocy of the rule), one of the engineers took mercy on us and gave us and our bikes a ride across in the back of an Army Corps of Engineers pickup truck – which we were told was breaking another rule (about carrying non-business cargo), but apparently a less daunting one to circumvent. And, by the way, Bob and I, perched on the side rails in the back of this pickup, holding on to our heavy bikes, was absolutely a more dangerous, likely to lead to injury, mode of crossing the dam than if we had simply walked or ridden across. Your taxpayer dollars at work.

The climb up from the dam was the killer climb of the day. 1200 feet again, but this time in under 4 miles. The grade was regularly 5 and 6%, but with some 7 to 9%’s thrown in. Unfortunately, that didn’t end our climbing for the day. The road into Colfax just kept going up, up and up – at gentler grades, but without much interruption.

So it was a tough riding day, and Bob and I are delighted that we are staying at a Best Western in Colfax, which, compared to some of our lodgings to date (e.g., Biggs Junction and Pomeroy), is like a luxury palace. The pizza order delivery is already in.

As for the scenery today, it was more farmland and wheat fields. It actually has a name – the “Palouse” region, which, according to Wikipedia, represents the “fertile hills and prairies north of the Snake River.” Definitely good viewing, in all, with our descent after the gravel climb, down to the Snake River and the damn dam, being a highlight.

The other highlight was provided by another Roger. At the top of the gravel climb, exhausted and low on water, we stopped outside the lone farmhouse in the area and peeked around hoping someone might be home (as opposed to their vicious dog) and be cajoled into refilling our water bottles. Just when we were ready to leave, along comes a pickup (definitely the vehicle of choice around here), with the farm’s owner, Roger, in it (see picture). Roger was a gem. He refilled our water bottles, let us use his bathroom, and talked knowingly about local and other routes. One of which was the one we were about to take to get to the dam. Guess what? The road was closed. Well, not exactly. Apparently, this involved a bit of an inter-family dispute, where Roger’s cousin had had the county condemn and close the road either over the objections of, or without notifying, other family members. Roger thought it should still be passable by bike, and offered to ferry us down there in his pickup (without our bikes) to reconnoiter. So we jumped in and went for a look. The road was beautiful – we had to ride it – but definitely barred by a locked gate. Lifting our bikes and ourselves over it would be doable, although not easy. But Roger had one more trick up his sleeve – the combination! Thanks, Roger. You made our travels today much more enjoyable.

Here is the map  of today’s route: 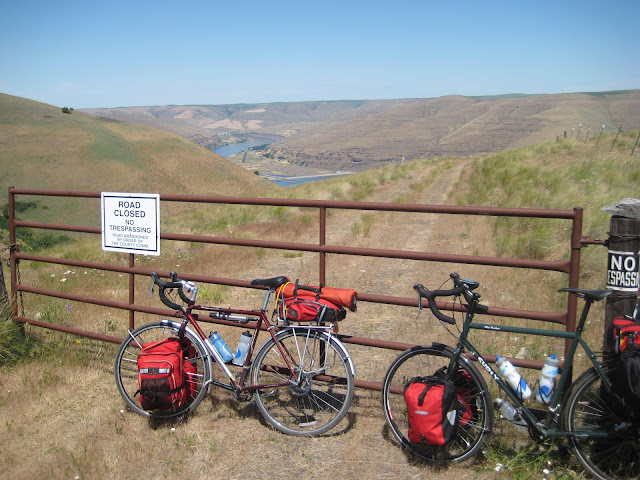 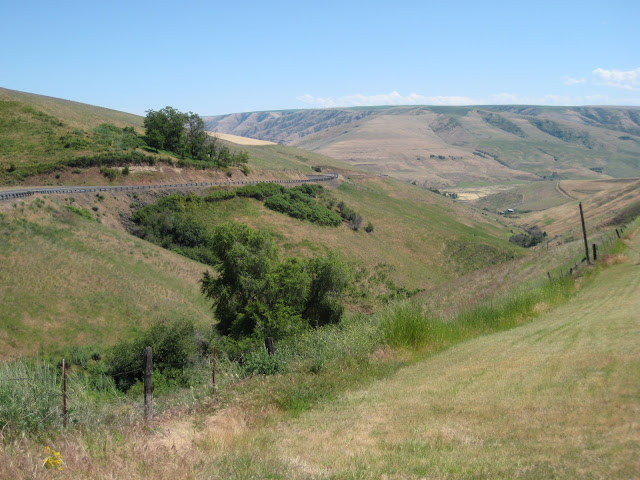 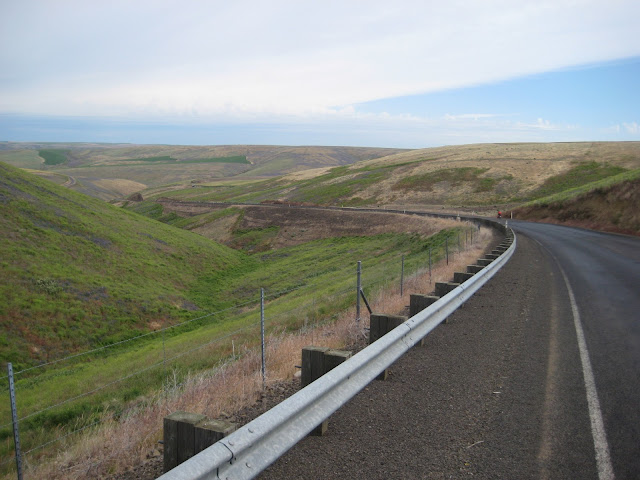 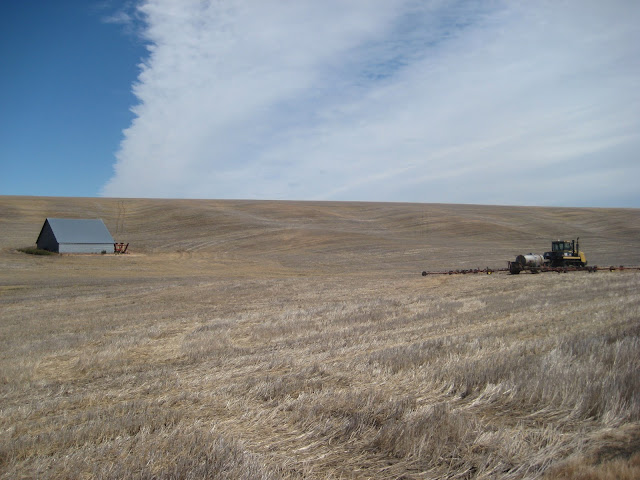 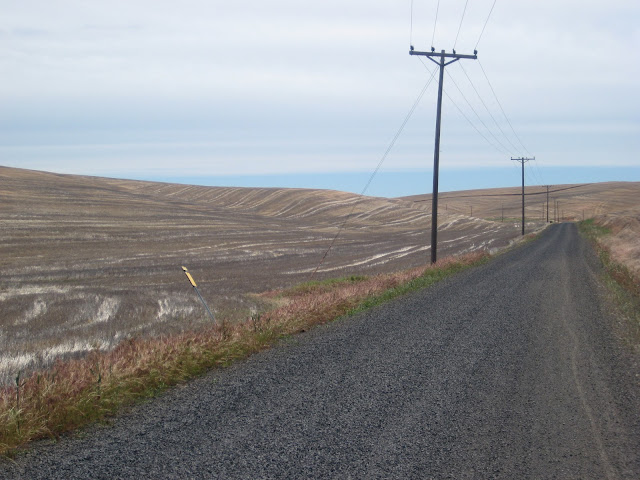 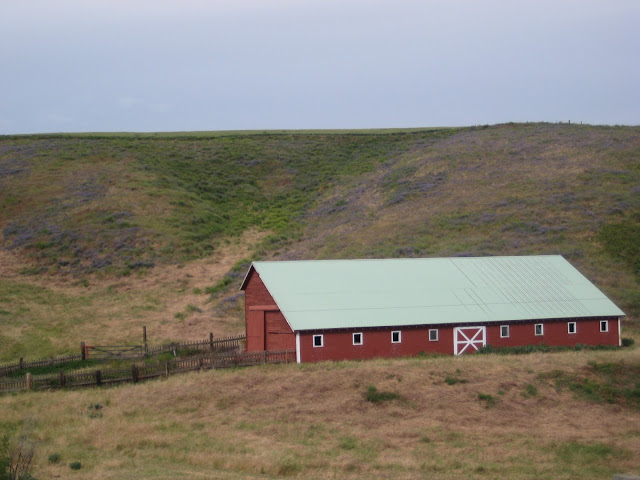 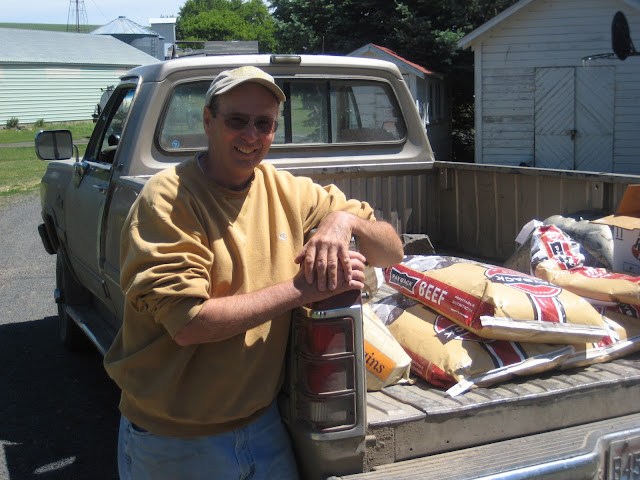 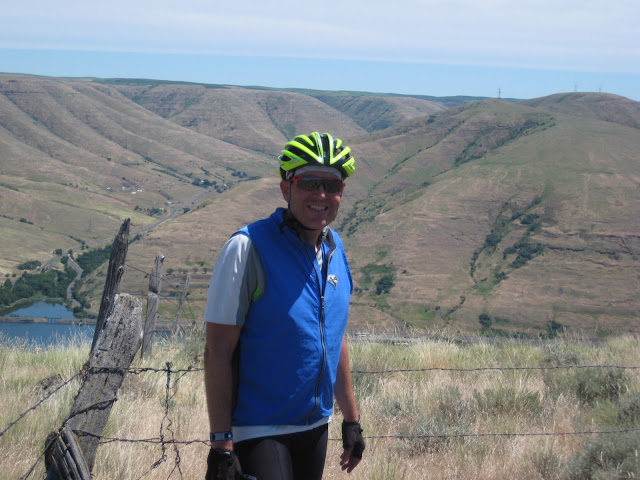 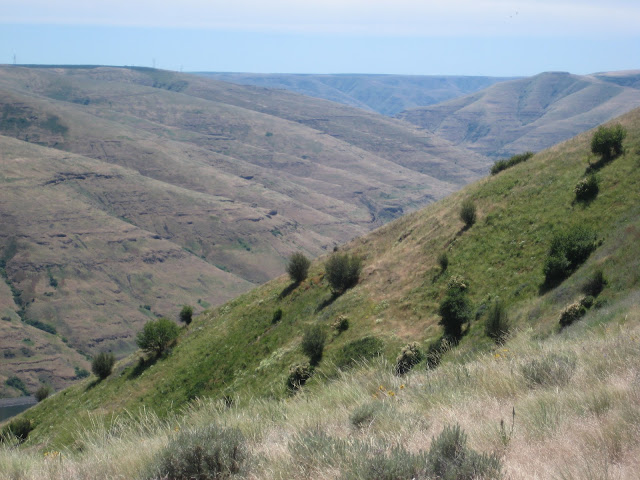 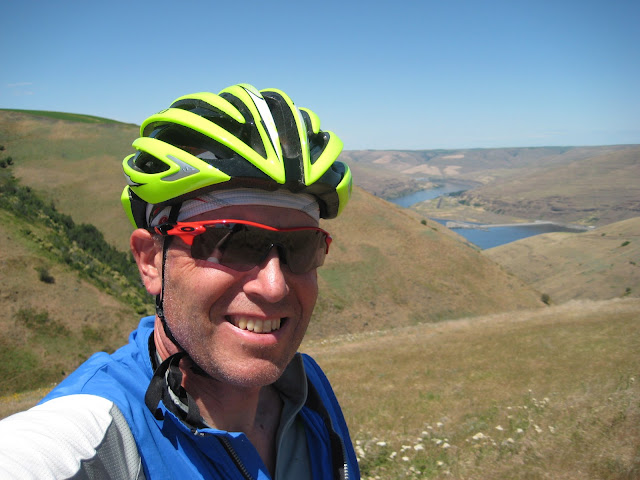 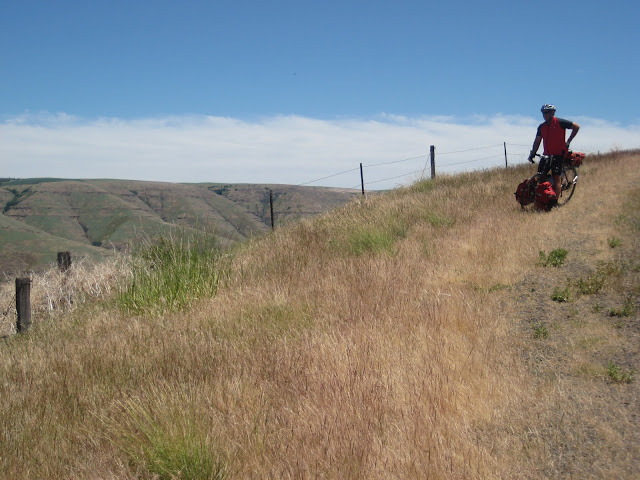 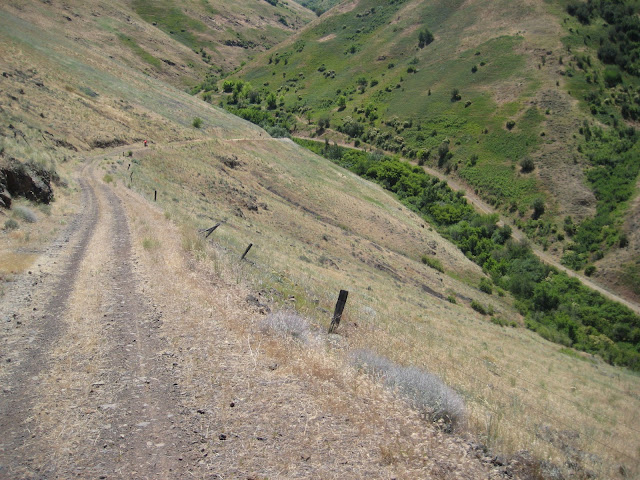 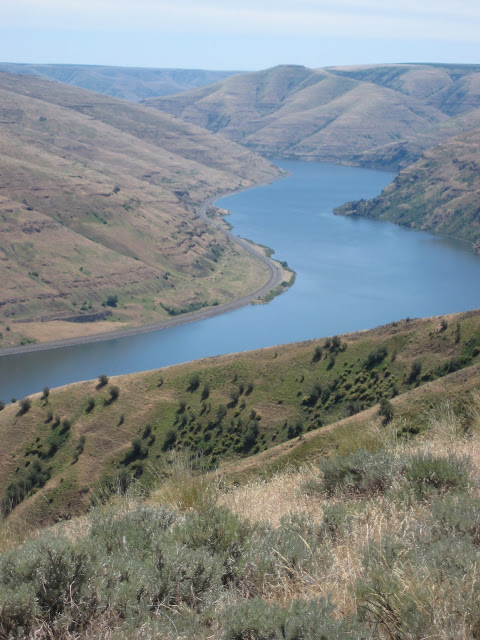